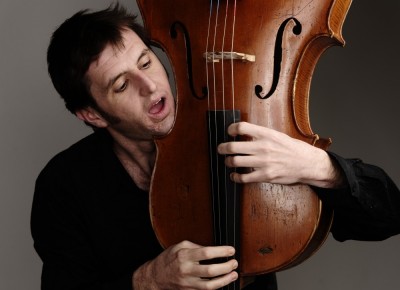 Geoffrey Gartner is a Sydney-born performer and educator. An exponent of the upside-down cello and a passionate advocate of the Fluxus ethos, he has brought countless new works to life, and collaborated with leading composers including Thomas Adès, Ross Edwards, Michael Finissy and Helmut Lachenmann.

Geoffrey gained his Bachelor of Music (Hons)
at the Sydney Conservatorium of Music. From 2002–2009 he relocated to America where he attended the University of California, San Diego. Here he completed Masters and Doctoral degrees in Contemporary Music Performance, studying with Charles Curtis.

Geoffrey has performed at festivals including the Warsaw Autumn, ISCM World New Music Days and the Roaring Hoofs Festival in Mongolia. In 2011 he made his European conducting debut directing the SBS Radio and Television Youth Orchestra on its concert tour of Eastern Europe for the Chopin bicentenary.

Renowned for his work with emerging composers and string players, Geoffrey has been a guest lecturer and performer at Stanford University, University of virginia, University of Western Australia and Sydney and Newcastle Conservatoriums. He regularly performs with new music groups Ensemble Offspring and Halcyon, and recently appeared with Sydney Dance Company playing ambulatory-cello in its production of Alexander Ekman’s Cacti.

Featured in Cello and Live Electronics