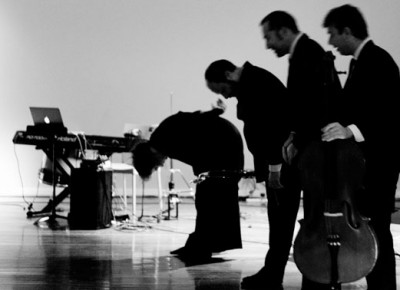 Decibel are a Western Australian new music ensemble founded in 2009. They focus on the combination of acoustic and electronic instruments in live performance, as well as innovating score creation and reading using score reading programs they develop within the group for tablet computers. Decibel have commissioned over 50 new Australian works since their foundation, but have also presented programs featuring important international composers. Their 2009/10 programs won the APRA|AMC Inaugural Excellence in Experimental Music Award in 2011, and was nominated again in 2012. They were finalists in the Arts Hub Performing Arts Awards, and director Cat Hope was a finalist in the WA Citizen of the Year awards for her work with the group. They have released 2 recordings, with another 2 due for release in the next year, and have toured around Australia, Europe and soon Malaysia. Their performances have been broadcast on SWR German Radio, ABC Classic FM and Radio National and in late 2012 they performed and presented on their work at the Inaugural Perth TedX talks.

Featured in The Key Note  and ICMC Finale